The Scottish Football Archive now boasts over 2,000 images taken by Charlie McBain during the 1950s, 60s and 70s.

Charlie McBain was a native of Blantyre and an ardent Motherwell follower and many of his photographs were taken in the Lanarkshire area. After he completed his national service with the Royal Air Force in the early 1950s, McBain began working as a photographer for the Hamilton Advertiser, covering games within Lanarkshire. He then began work with Scottish Universal Newspapers, becoming their chief photographer, and winning the Scottish Sports Photograph of the Year in 1976 for a picture of Gregor Stevens tussling with Graham Shaw. This photo appears in our collection along with many other impressive action shots representing over 30 Scottish Clubs, the Scottish national team and the referees of the day.

Charlie McBain sadly passed away in June of 2013 and we feel especially privileged to possess his photographs, and proud to share such images, many of which will not have been seen before. The images not only capture the footballers, but periods in time. Sections of stadiums which have now been replaced, supporters in contemporary dress and the advertisements of the day often appear within the shots.

These images may not only capture memories, but provoke discussion amongst anyone who has followed football. 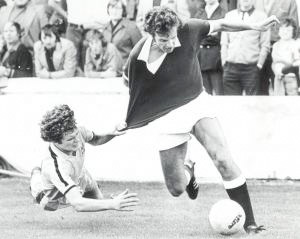